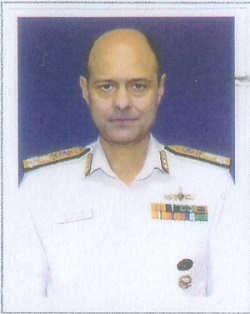 VAdm Sanjay Jasjit Singh, AVSM, NM was commissioned in 1986 in the Executive Branch of the Indian Navy. He is a graduate of the National Defence Academy, Pune. He specialised in Navigation and Direction in 1992, and attended the Advanced Command and Staff Course at UK in 2000. He has undergone the Naval Higher Command Course in 2009 at Naval War College, Mumbai and the National Security Strategy Course in 2012 at the National Defence College, Delhi.

He has held a range of command, training and staff appointments, and has served on most class of ships of the Indian Navy over the past three decades. His sea command appointments include that of the ASW and UAV-control frigate Taragiri and the multi-role frigate Trishul. His training appointment include Staff Officer (Navigation and Direction) P-15 Training Team, Officer in-Charge Local Workup Team (West) and Office in-charge Navigation and Direction School. His staff appointments include Indian Naval Attache at Iran and various directorates at Naval HQ at New Delhi.

He is married to Mrs Zarine Singh and has two Children, Payal, and Samar, their son, is pursuing his graduation in BTS.