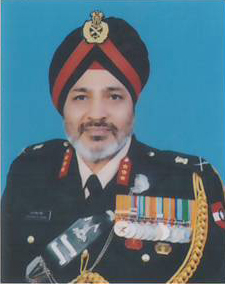 Lt Gen Taranjit Singh, AVSM, VSM** is an alumnus of National Defence Academy and was commissioned from Indian Military Academy on 19 Dec 1981 into 65 Armoured Regiment. The General Officer has commanded the same Regiment in J&K Sector during OP RAKSHAK and OP PARAKRAM and is presently the Colonel of 65 Armoured Regiment. He has had operational experience during OP PAWAN as part of Indian Peace Keeping Force (IPKF) in Sri Lanka for two years with the Regiment. In a career Spanning 38 yrs, he has held a number of prestigious appointments before taking over the present appointment of Deputy Chief of Integrated Defence Staff (Operations). The General Officer is a recipient of Ati Vishisht Seva Medal, Vishisht Seva Medal and Bar for distinguished service.

The General Officer has served with UNAVEM-III as Military Observer in Angola, Brigade Major of an Independent Armoured Brigade in OP RAKSHAK in J&K and Director in Military Operation Directorate. Apart from being an Instr in Gunnery at Armd Corps Centre and School, he has been a Directing Staff at Defence Services Staff College (DSSC) at Wellington. He has commanded an Independent Armoured Brigade, RAPID and a prestigious Strike Corps in the Western Theatre. His Operational assignments includes Brigadier General Staff Operations both of Strike Corps and a Pivot Corps and Major General General Staff of a Command Headquarters. At the Apex level of the Army Headquarters, the General Officer has been Director General of two important Directorates, Director General Recruiting dealing with recruitment and induction of soldiers and officers and Director General of Perspective Planning dealing with Capability Development. The officer holds M Phil degree from DAVV, Indore and University of Madras.

The General Officer is married to Mrs Harkeerat Kaur, an Educationist and has a son and a daughter.